If you would like a Traditional Latin Mass Liturgical Calendar for home visit:   fraternitypublications.com 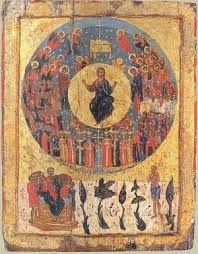 Vespers and Lauds are two of the most important parts of the Divine Office (or Liturgy of the Hours). The Divine Office is the official set of prayers marking the hours of each day and sanctifying the day with prayer. It consists primarily of psalms supplemented by hymns, readings and other prayers and antiphons. Together with the Mass, the Divine Office constitutes the official public prayer life of the Church. It also forms the basis of prayer within Christian monasticism.

Praying the Divine Office is an obligation undertaken by priests and deacons intending to become priests. The laity are under no obligation to do so, but “are encouraged to recite the divine office, either with the priests, or among themselves, or even individually” (CCC 1175).

The Divine Office, along with the Mass, has been the Church’s liturgy from the earliest times. Early Christians continued the Jewish practice of reciting prayers at certain hours of the day or night. In the Psalms we read “O Lord, in the morning thou dost hear my voice; in the morning I prepare a sacrifice for thee, and watch” (Psalm 5:3); “At midnight I rise to praise thee, because of thy righteous ordinances” (Psalm 119:62); “Seven times a day I praise thee for thy righteous ordinances” (Psalm 119:164). The Apostles observed the Jewish custom of praying at the third, sixth, and ninth hours, and at midnight (Acts 10:3, 9; 16:25).

From the time of the early Church, the practice of seven fixed prayer times have been taught. Hippolytus of Rome (c. 170 – c. 235) instructed Christians to pray seven times a day “on rising, at the lighting of the evening lamp, at bedtime, at midnight” and “the third, sixth and ninth hours of the day, being hours associated with Christ’s Passion.” The eight parts, or hours, of the Divine Office are:

Beginning on May 1 (the feast of St. Joseph the Worker), we will be praying Vespers on Saturdays at 4:30 PM and Lauds on Sundays at 8:00 AM, both according to the 1961 breviary. The chants with a translation will be available for all in attendance.

The character of Lauds is that of praise; of Vespers, that of thanksgiving. Both follow a similar format:
Invitatory (“Deus in adiutorium meum intende…”)
Five psalms or parts of psalms, each preceded by and followed with an antiphon
The chapter, a short biblical verse
The hymn, which varies according to season and feast, followed by its versicle and response
The Canticle of Zechariah (“Benedictus…”) at Lauds or the Canticle of Mary (“Magnificat…”) at Vespers, preceded by and followed with an antiphon
The collect of the day, followed by commemorations of any concurring feasts

Recently I watched a new documentary about Supreme Court Justice Clarence Thomas. It’s available at https://tubitv.com/movies/562211/. About 26 minutes in, Justice Thomas recalls his time at Conception Seminary College in northwest Missouri in the mid 1960s. He says “I loved the contemplative life. I loved Lauds, which was morning prayers; Vespers, evening prayers. I loved the Gregorian chant.” I hope you will have the same love and I look forward to praying with you.